The detector consists of two part:

Two parts better than one

Making the detector in two-parts allowed us to fit the largest volume detectors into the module, while still keeping it palm-sized. It also means we can fit a neutron detector as standard. Neutron detection is a vital part of CBRNE Homeland Security because it increases the chance of detection from shielded radioactive sources.

Large volume detectors give you the edge. The large radiation detector volume means the device can find and identify radioactive material quickly and is much less prone to false alarms.

Using the phone as the display and for some of the computing means that you get a big easy to use screen, with communications back to your HQ already built in. You can see the D3S display in more details on this page dedicated to the detector app. 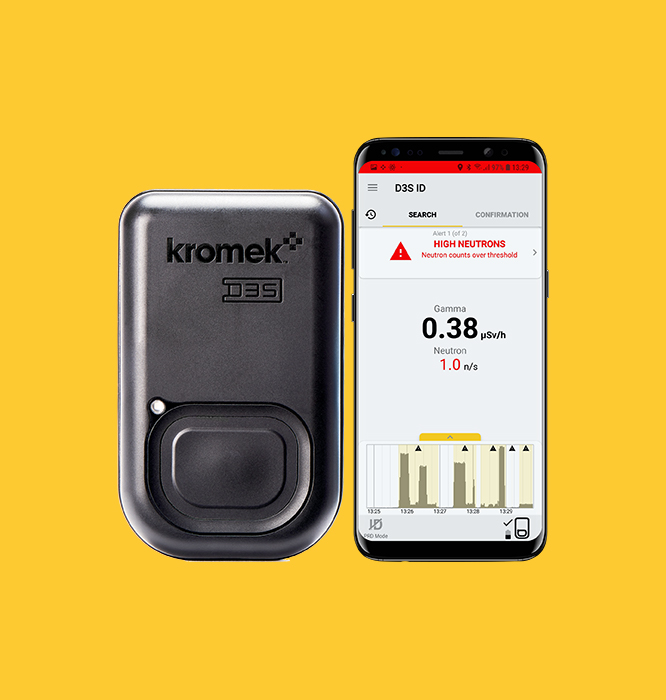 PRD Personal Radiation Detector from Kromek: easy to carry and use covertly

Fit it on your belt, equipment vest or MOLLE backpack using a range of holsters or slip it in your pockets and carry it covertly. One of the benefits of making the phone the display means that no one will suspect that you are checking for radioactive material. The D3S ships in either its own rugged case or in cases which hold ten at a time (this case also acts as a charging station for detector and phone).

Small, lightweight and user-friendly, the D3S PRD is a continuous search device that can be worn by first responders as well as customs and border protection personnel to quickly and accurately detect, locate and intercept radiological threats.

The D3S PRD is designed for:

Designed for now and for the future

The D3S PRD shares the same detector and phone as the other models in the D3S line. This makes it easy to upgrade the D3S PRD to a full D3S ID with a simple software update – nothing changes other than the functions available on the phone app. And if you ever decide to become fully networked with the SIGMA Network then you can upgrade D3S to D3S NET mode with another software update.

So the D3S is future proof changing to meet your needs and the threat level. You won’t be stuck with a drawer full of useless radiation detectors again.