A wearable RIID designed for first responders, armed forces, border security and other CBRN experts. More powerful than a RIID, a pocket-sized device that can recognise isotopes and neutrons in seconds.

The D3S ID wearable RIID gamma neutron detector identifies radioisotopes and detects neutrons in seconds but unlike a conventional RIID, it is small and light enough to be wearable and concealable. All a suspect will see is someone looking at their mobile phone or listening to an earbud.

Designed to protect your team and the public from radiological attack

Designed to detect radiological threats like dirty bombs, radioactive contamination, smuggling of radioactive substances and radiation at the scene of an accident or terrorist attack. The D3S ID wearable RIID gamma neutron detector turns anyone into a radiation warning system that is hard to avoid and can go anywhere a terrorist or smuggler can.

No need to point the detector at a threat because the D3S ID scans in the background, it identifies isotopes in SECONDS and informs the user via a mobile phone app, (on the phone that comes with the detector*) – no need for the public or a target to know what you are doing. It can even be joined to the DARPA Sigma network to share radiation alerts with a centralised control room.

You never know where your mission will take you and what you will face so we designed the D3S ID to operate in both high dose and low dose radiation environments. 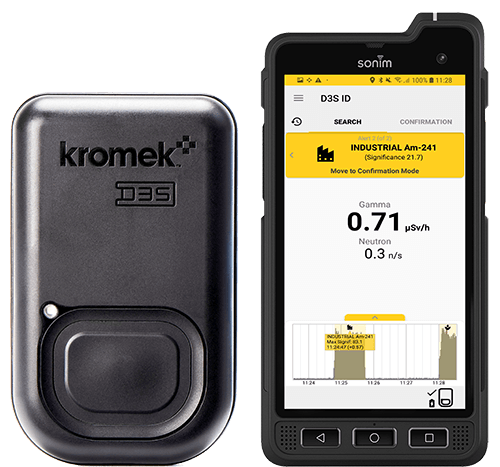 What is the D3S ID wearable RIID?

It is a wearable, concealable gamma neutron RIID which puts the power of a RIID into a package the size of a PRD. It is the new standard in portable radiation detectors.

Wearable, unobtrusive and hands-free it is continuously scanning for radiation: gamma-ray and neutron (so it can detect shielded devices).

No one can see it in operation, or that you have found anything suspicious. You can go anywhere a terrorist could have gone and search areas quickly and efficiently. Unlike static or vehicle-mounted detectors, a person carrying a hidden detector is tough to avoid and detect; literally, anyone could be carrying a D3S ID. 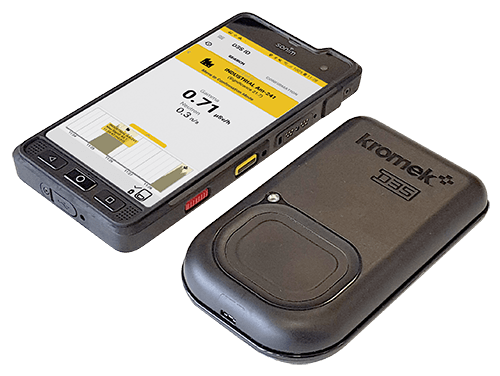 It takes less than a minute to deploy: take it out of the box, switch it on, put the sensor on your belt, the phone in your pocket, and you are good to go. Using the D3S, you can quickly and easily equip anyone to become a radiation detector giving you fast coverage of a location.

Specifically designed for use by anyone, specialists and nonspecialists alike, with minimal training required. The D3S can be used by staff across a wide variety of sectors, including customs and border patrols, police, first-responders, at airports, event security and environmental monitoring.

For Military personnel across the globe, it’s imperative that they have the best of products and solutions available to them to do their job. For any military operation, the ultimate goal is to ensure not only the safety of the individual, but the safety and livelihood of the people and country they serve.

The wearable, discreet and lightweight D3S ID is another game changer for Military operations and personnel. The unobstructive, handsfree device was designed to allow you as front-line personnel to take it out of the box, switch it on, put the sensor on your belt, the phone in your pocket, and you are good to go.

Put your trust in Kromek Find out more about the D3S ID handheld detectors

A PDF with the complete specifications for the D3S

Speak to our experts about the D3S

Make sure the D3S ID meets your needs and your budget.

Get prices and more details

Who is it for?

Designed for anyone who is involved in the radiological protection of an event, person or location including:

How do you use the D3S ID

The D3S ID wearable RIID is designed to be used by almost anyone.
Turn the detector on, launch the phone app, and in seconds you are good to go.
Armed with the D3S ID, you are a walking gamma and neutron detector, able to detect even shielded sources and identify the isotopes used.
The D3S ID is hands-free, you can go about your duty as usual with the phone announcing any radiation found into your earbud or by vibrating – alerting you to take further action.

We have launched a D3S Japanese version to our distributors and clients in Japan.

As well as the translation of menus and other text, the app also talks to you in Japanese.