A group from the University of Bristol, in the UK who used Kromek’s radiation detectors to map the radiation levels at Chernobyl, have revealed that they found some unexpected areas of high radioactive contamination, Chernobyl’s hidden radioactive hotspots could be a danger to the increasing numbers of tourists entering the site.

“Radioactivity in the Red Forest was unevenly distributed. While radiation had subsided in some areas, others maintained contamination levels that were dangerously high”
Project leader Dr Tom Scott, a professor at the University of Bristol and leader of the expedition.

How was the Red Forest mapped?

A fixed-wing drone was outfitted with two Kromek Sigma 50 radiation detectors. The Sigma 50 is a scintillation detector using CsI(Tl), thallium activated caesium iodide crystal. CsI(Tl) has a light output of 54 photons/keV and is one of the brightest scintillators known. The Sigma 50 itself is robust and can survive in the field and does not require any cooling. The team already had experience of using Sigma 50s in rotary UAV drones.

A rotary drone was used for detailed analysis

Any areas of interest found once the forest had been mapped was investigated further using a rotary (helicopter-style) flying drone that could hover over the area of interest and get very close to the radioactive material. 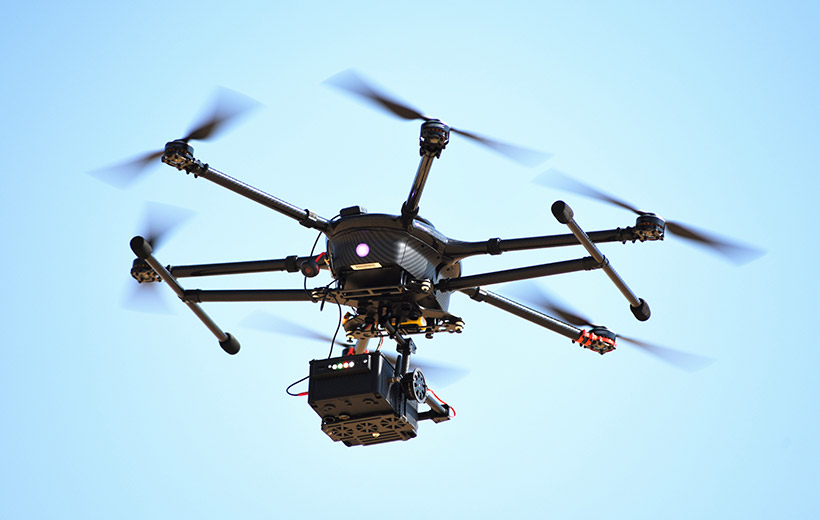 The radioactive hotspot registered a dose-rate of greater than one millisievert per hour (the maximum permissible dose not requiring an individual’s classification as a Radiation Worker in the UK is six mSv per year), the area is believed to contain material from the original emergency cleanup activities performed over three decades ago.

The Physics World article about the expedition also has an informative overview of the Chernobyl disaster: Physics World – Glimpsing Chernobyl’s hidden radioactive hotspots

Read more about the mission in our user story: Mapping the Chernobyl Red Forest

You can read more about the mission and the equipment used in our User Story: Radiation mapping the Red Forest, Chernobyl, Russia.

You can hear Tom Scott talk about the mission with the BBC here: https://www.bbc.co.uk/news/science-environment-48193866

We sell out of the box radiation drone solutions both rotary and ground-based rovers, see the range of radiation detector drones here.

We make a range of small, sensitive and light detectors perfect for use on your own drone, see the radiation detectors for drones here.

Happy Chinese New Year to all our customers and distributors in China and everyone celebrating the new Lunar Year.

Why space is not our final frontier

When we develop our devices, especially our medical gamma/x-ray detectors we need something to image. This sheep skull, found while walking in Northumberland UK, proved the perfect subject.